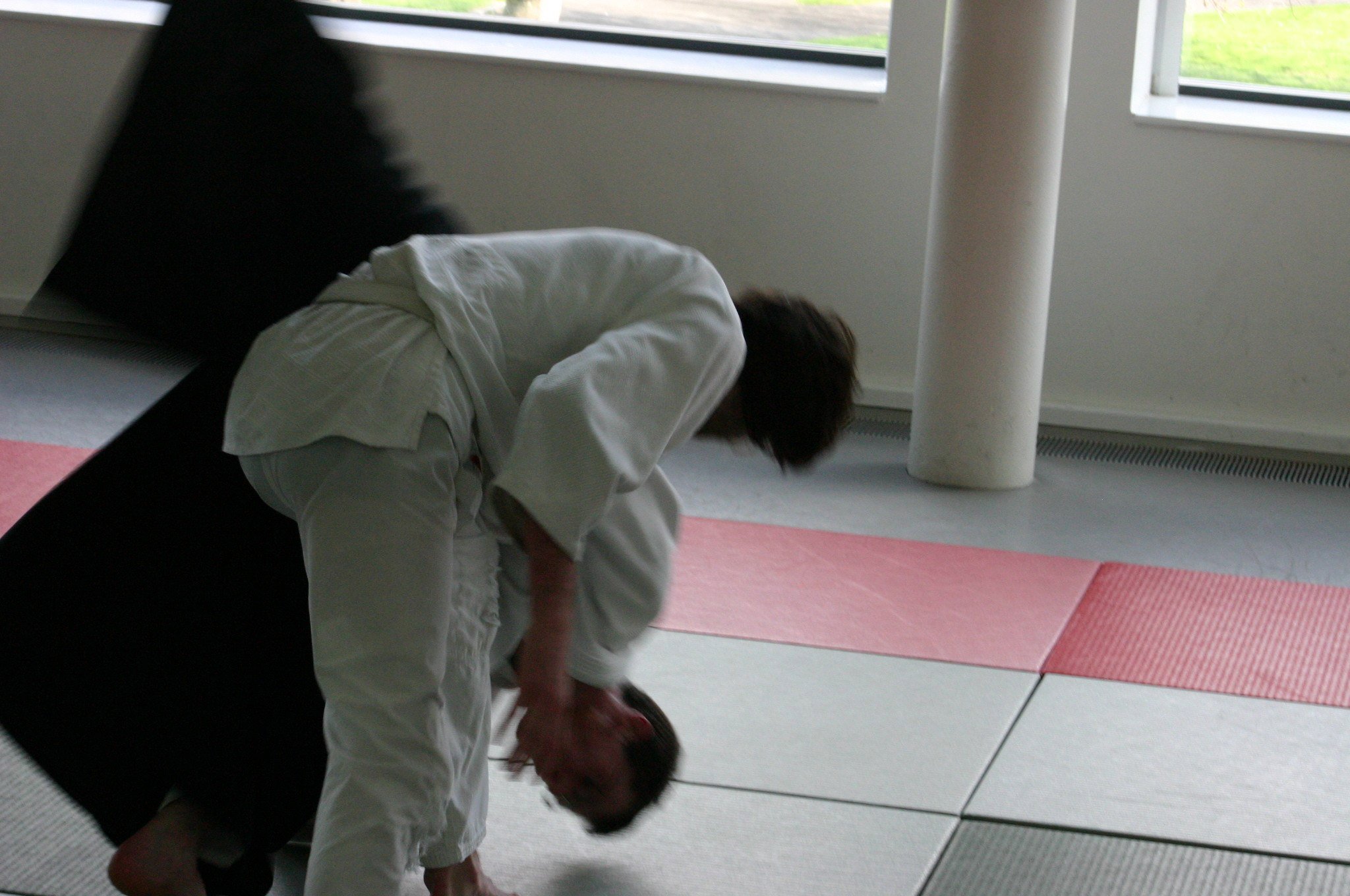 Beginners sometimes ask about self-defence. ‘Is aikido effective?’ It’s a fair question, but, in my opinion, there is no straightforward answer. Here are just a few personal reflections.

Effective for what scenario?

You often hear martial artists use the phrase ‘in the street’. I never really understood what that means. If they have some specific scenario in mind, they generally don’t elaborate on what it is.

In my own life experience, situations involving aggressive and sometimes violent behaviour were chaotic and confusing. Since these experiences were (thankfully) very rare for me, and because they happened quickly and unexpectedly and for no obvious reason, at the time they just seemed surreal: I distinctly remember asking myself, is this really happening? Aggressors acted in strange and unpredictable ways. There was no sudden attack, and it was very unclear to me whether or not we were actually fighting. I really only made sense of these experiences after they were over. Conclusion: real-life self-defence situations can be very messy and perhaps quite different to how you might imagine them.

Martial arts teach fighting skills. But it strikes me that self-defence is really a different thing altogether. To me, self-defence is about self-preservation. You win not by defeating an opponent, but by waking up safe in your bed and not after spending the night in A&E (or needing a metal plate inserted into your head, as happened separately to two of my friends).

When confronted with an aggressive and potentially violent person, you have to make a continual calculation between three different options: 1) try to de-escalate the situation, 2) run away, 3) try to take the person out.

Option 1 (de-escalate) is obviously the smartest. Now, martial arts are generally not big on teaching verbal negotiation skills. But the ability to keep calm, project confidence, maintain a safe distance, and keep your peripheral vision open are all skills you develop in martial arts training. And these might well be more valuable for self-defence than all the fighting techniques combined.

Option 2 (run away) requires a lot of courage, since pride may encourage you to stand your ground, even if it is not the sensible thing to do. (Unfortunately, I learnt this once from experience.) You never know when your aggressor will produce a weapon or when their friends will walk around the corner. A martial art, like aikido, that teaches you how to free yourself from being grabbed and how to unbalance your attacker in order to make good your escape seems to me to be very useful indeed.

Option 3 (take them out) should only be a last resort. By becoming the aggressor, you run the risk of elevating the level of violence, and if successful may even be exposed to prosecution. Even when necessary, the best strategy is probably to attempt to disrupt and escape.

What makes a martial art effective?

The Internet is full of discussion on whether X or Y martial art is more effective. But, to my mind, there are two other factors that are probably even more important than the art itself.

The first is the individual practitioner. A person who starts out with poor fitness and conditioning, who has no background in physical training, and who lacks general co-ordination can hardly expect to become an effective martial artist overnight. And natural ability aside, dedication and consistency in training are also huge factors (or so I tell myself). Everybody can make progress, but inevitably some people will make more progress than others.

A second major factor is the standard of a club. An art may be wonderful, but students will be limited by the instructor’s own ability as well as their ability to teach. The level, ability and commitment of training partners is also crucial for development.

(There is a former aikido instructor on YouTube who now makes most of his income from videos about the ineffectiveness of aikido. But judging from his earlier videos, his own technical standard and physical condition were very lacking indeed. Is the art really to blame?)

Now to get to the point. First of all, regarding the techniques themselves: nobody who has ever been thrown or pinned by an advanced instructor is ever in doubt that aikido techniques are extremely powerful. Once you’ve had that experience, you never forget it.

It is sometimes difficult to persuade beginners of this, however. The reason is that we cannot throw people powerfully until they have developed adequate skills of falling and self-preservation (ukemi). To be skilled enough to receive a full-power throw safely, a person usually needs to have practised for at least a few years. We often describe aikido as non-violent art. Yes, the dojo creates the conditions for non-violent and mutually beneficial practice. But if you resist an aikido technique against someone who really knows how to apply it, you will certainly get yourself injured.

There is a bigger issue in aikido, however, that I think is not acknowledged often enough. The ability to perform powerful techniques in a controlled situation is not the same as being able to apply them in a chaotic situation against a totally uncooperative partner. A controlled and predictable environment is a very good environment for learning basic techniques. Some clubs (like ours) also engage in regular free practice, where we act spontaneously, make mistakes, discover our weaknesses and learn how to apply our knowledge. But even so, this type of practice is usually relatively controlled and predictable.

I think it would be very helpful in aikido to spend more time exploring different kinds of free practice, with different levels and types of resistance, in order to understand better how to apply techniques in difficult situations. Traditional training is very good for building solid foundations. But maybe for more advanced practice we could learn some useful things from other martial arts.

Aikido does not pretend to teach self-defence for the modern world. It is a traditional martial art, created largely in the earlier 20th century, drawing on a much older Japanese tradition. But for real-life self-defence, the art seems to me to have good potential applications, especially around de-escalation and, where necessary, disengagement. (The goals and traditions of aikido make it very unsuitable for sport fighting in the era of MMA, incidentally. But that is another issue.)

In the end, the effectiveness of a martial art probably depends on factors much broader than the art itself. Finding a good quality club, with a competent instructor, and committing oneself wholeheartedly to training, both within the dojo and independently, are probably even more important.

Finally, it should also be acknowledged that self-defence is not the only or even the most important aspect for most aikido practitioners. Aikido training confers many other benefits, and for many of us is just immensely enjoyable in and of itself.